The 49.2 composite reading of the Caixin/Markit China manufacturing Purchasing Managers Index (PMI) in August marks the first contraction in activity since April 2020 when China was recovering from its initial COVID-19 outbreak.

The recent rise in COVID-19 infections in the country is now once again taking its toll on the manufacturing sector, as we have witnessed in the ports of Yantian in May to June and recently in the Ningbo-Zhoushan.

China is a huge driver for shipping demand whichever way we look at it. One of the indicators for the direction of this demand is China’s manufacturing PMI, in which two essential composite indicators are designed to provide a single-figure snapshot of operating conditions in the manufacturing sector of the Chinese economy.

“Also in August, the sub-indicator “new export orders” fell below the threshold-level of 50 for the first time since February 2021, reaching 46.7. This an indicator of future activity in foreign trade and therefore also an indicator for container shipping demand,” he said.

"Is it a worrying development? Well, if the drop into negative territory is the first of many months in sub-50 territory – it’s a problem, if it’s merely a one off, keep calm and carry on,” says Sand. 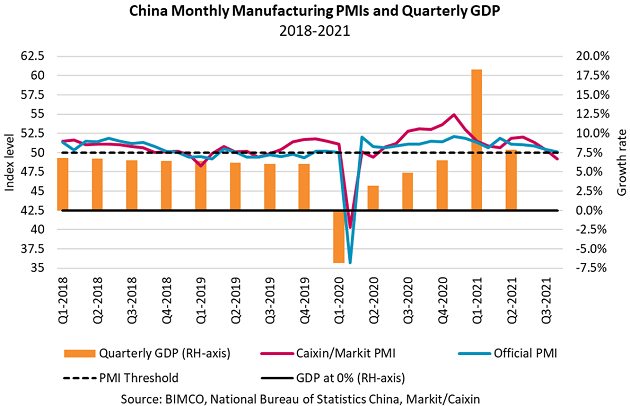 Why are there two different PMI’s?

According to Credit Suisse, the National Bureau of Statistics’ (NBS) official PMI is best at explaining GDP and industrial production and manufacturing in general, whereas the Caixin/Markit PMI is the better indicator for exports.

“The NBS official PMI reading of 50.1 in August 2021 indicates the smallest amount of expansion for the manufacturing sector. As the better gauge for industrial production, this is relevant to dry bulk shipping where a lot of imports are related to heavy industries such as steel production and power generation,” says Sand, adding:

“In terms of overall economic growth, the quarterly GDP for the second quarter indicates a solid GDP growth in China, but also a relative slowdown.”

BACK TO: US West Coast laden container exports fall to 327,417 TEU NEXT: China's 2021 crude oil imports down 5.7% as strong start loses steam