Many agricultural trades have been exceptionally strong in 2021 and several grain types have experienced record high exports. US corn exports are no exception.

These reached a record high of 49.1 million tonnes between 1 September (when the marketing year started) and 20 May. This is 77.6% higher than in the 2019/2020 marketing year which recorded exports of 27.7m tonnes and finished the season at 43.3m tonnes (September to end-May), a level already surpassed in this current season.

The previous record for exports between September and May was held by the 2016/2017 season when exports in the equivalent week of May stood at 41.9m tonnes.

Also performing strongly are outstanding sales for this season which, although no guarantee for upcoming exports, provide a good indication. These currently stand at 14.6m tonnes which, if all the volumes sold are exported, would bring total exports this season to 68.6 million tonnes, considerably higher than the 2016/2017 marketing season which currently holds the record at 57.5m tonnes. At this point in the previous marketing season, outstanding sales stood at 12.1m tonnes, slightly lower than what was exported between 20 May 2019 and the end of that season: 15.6m tonnes. 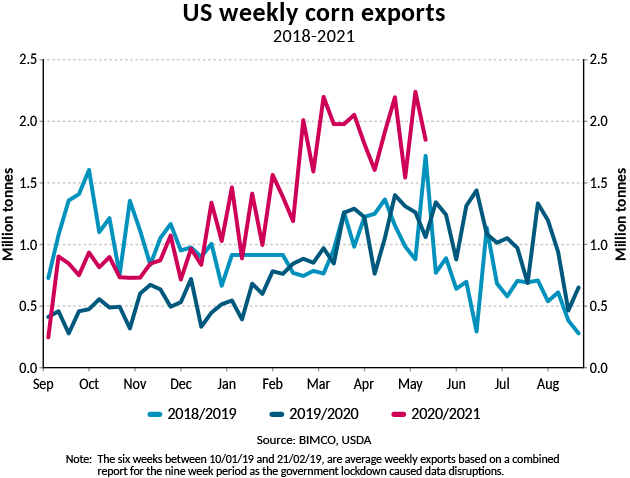 At this point last season only 190,600 tonnes of corn had been exported from the US to China. This year that number has skyrocketed to 13.6m tonnes as Chinese buyers stock up on US grains and send the number of Panamax ships (75,000 tonnes) needed for this trade from around 3 to 182.Higher exports to China are the primary reason for the 77.6% growth in total US corn exports so far this season, with China taking the top spot.

Two other destinations dominate US corn exports: Mexico and Japan, and along with China, the three combined account for 75% of total US corn exports. Exports to Mexico and Japan have reached 10.6m tonnes (up 4.2% from last season) and 7.9m tonnes (+28.5%) respectively and 11.2m tonnes have been exported to the rest of the world since 1 September 2020, up just 0.2% from last season.

“After years of disruption to the US-China corn trade due to the trade war, Chinese buyers have well and truly established their dominance this season, putting in large orders, not only to ensure enough feedstock, but also stock building, and an effort to make good on the stipulations in the Phase One Agreement,” says Peter Sand, BIMCO’s Chief Shipping Analyst.

“For shipping this is great news; not only are overall volumes higher than they have ever been, so are sailing distances with both China and Japan providing much longer sailing distances than the other top buyer Mexico, as well as other buyers in South and Central America and Europe,” Sand says.

For a wider perspective on the current strength of the grains market and the dry bulk sector, as well as the macroeconomic situation and developments in tanker and container shipping check out BIMCO’s latest Shipping Market Overview and Outlook and its associated webinar.