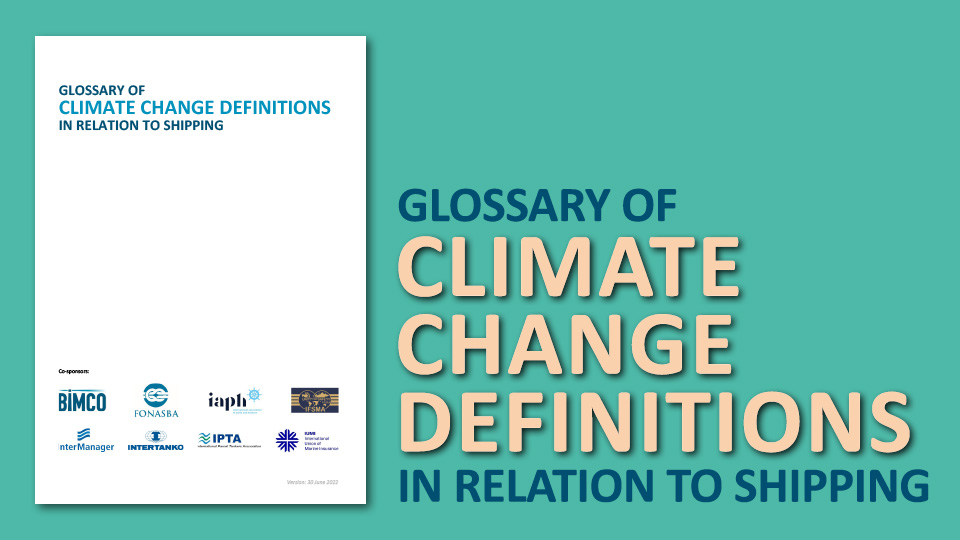 BIMCO has published a climate change glossary to clarify and harmonise definitions and terminology to ensure that the discussions around climate change and potential solutions for the shipping industry are based on a mutual understanding of what the commonly used terms mean.

BIMCO, FONASBA, IAPH, IFSMA, InterManager, INTERTANKO, IPTA and IUMI have published a climate change glossary to clarify and harmonise definitions and terminology to ensure that discussions around climate change and potential solutions for the shipping industry are based on a mutual understanding of what the commonly used terms mean.

The glossary is designed to contain encyclopaedic definitions. This means that the definition provides some elaboration and highlights differences between what might be considered similar definitions. The inclusion of a definition does not imply that it is a position adopted by the co-sponsoring organisations and definitions should always be considered neutral. For example, the inclusion of the term “offsetting” should not be interpreted as the co-sponsors having a positive or negative position on offsetting as a concept.

Wherever possible (and if relevant) definitions are based on those used by the Intergovernmental Panel on Climate Change (IPCC) or other competent bodies and as such agreed by scientific and/or political consensus. Where changes have been made to an original definition, they have been done so with the intent to make the definition more applicable to shipping or to make the definition easier to understand for the reader. Where used, references are provided at the end of the document.

Where a high-level definition (ie one which is agreed at international level by consensus) does not exist, novel definitions have been created. These have been sense-checked for scientific integrity against common usage of such terms in scientific literature and subsequently approved by BIMCO’s sub-group on alternative fuels.

Where a definition includes reference to another definition these are indicated in italics.

The intent of the glossary is not to mandate the use of the definitions within it, and we are aware that our members and the community may be using different definitions. It is intended to provide members with a tool that supports them in developing clear communication.

Development of the document:

The document was developed by the BIMCO secretariat under the auspices and in collaboration with the sub-group on alternative fuels and was reviewed by the BIMCO Marine Environment Committee.

Please note: a searchable, web html version of the Glossary will follow soon.