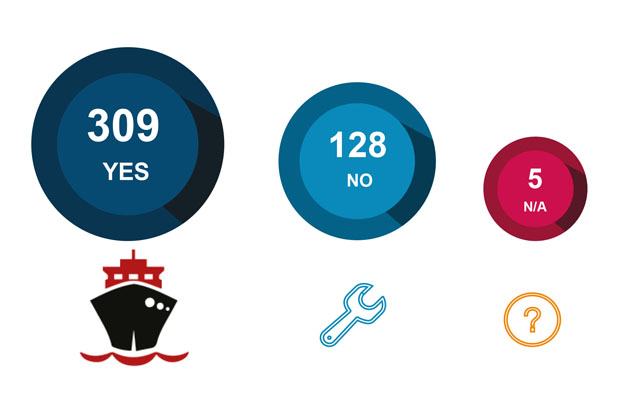 BIMCO is seeking to drive the improvement of standards for ships at dry bulk terminals across the world and has today launched its first report on terminal performance.

Since 2015 BIMCO has been collecting feedback on the performance of port terminals in order to be able to report the results to members and, ultimately, to give further guidance to ships. BIMCO has received over 400 feedback reports from bulk carriers on the performance of dry bulk terminals around the world. The data has been collected, evaluated and presented in this first annual report.

This report gives overall ratings and analysis to show a picture of the current standards at a large number of terminals around the world. BIMCO members will also be able to access performance information on terminals in the relevant port section on the BIMCO website.

The dry bulk vetting scheme makes it possible for companies to compare terminal performances by using actual experiences provided by the crew of the bulk carrier. In general the performances of terminals have been rated positively in this first report and shows a high degree of care and good service shown to ships.

The BIMCO dry bulk terminal data was collected in the period from 19 January 2015 to 1 December 2016 and 94 ships provided 443 reports from 231 different terminals around the world.

It is very important that more ships participate in the BIMCO dry bulk vetting scheme and continuously report their experiences after each terminal call.
The information will be invaluable for our members to help guide the planning of future calls at terminals around the world. We need more reports from a lot more ships to improve the service and to have more robust analysis for next year’s report.

In December 2016, BIMCO improved the questionnaire by adding new questions aimed at the port level and included:

The BIMCO Dry Bulk Terminals Vetting Report 2016 is free of charge and available for download. For more information and to access the questionnaire go to the BIMCO questionnaire page.