Baltic Dry Index climbs to an all year high

The dry bulk market has been devastating so far in 2015. However, June has somehow reversed it all in less than three weeks if judged by the Baltic Dry Index (BDI).

The dry bulk market has been devastating so far in 2015. However, June has somehow reversed it all in less than three weeks if judged by the Baltic Dry Index (BDI).

June has delivered what May was unable to – keeping the momentum going. Since the drop in January, we have seen the BDI average at 576 for the four months of February to May.

According to data from Commodore Research, Chinese iron ore fixtures hit an all-year-high in mid-May. Most of it naturally came from China's main supplier Australia, but the demand was supported by an all-year-high level of shipments out of Brazil too. Since then Capesize earnings lost some ground only to come back with a vengeance as more shipments were coming out of Brazil and Australia again. The weekly number from Brazil went up by 45% when comparing the time up-to mid-May with the following weeks.

Chief Shipping Analyst at BIMCO, Peter Sand, Says: “We have seen the BDI constantly go higher since end-May. Chinese iron ore fixtures has been on a slow but rising trend throughout the year, so what we are seeing now has been long coming.

But this is not all about the demand side, the lift would not have been possible without the support coming from a decreasing Capesize fleet size. Since we entered into 2015 the Capesize fleet is now short of 22 ships equal to a drop in capacity of 0.7% 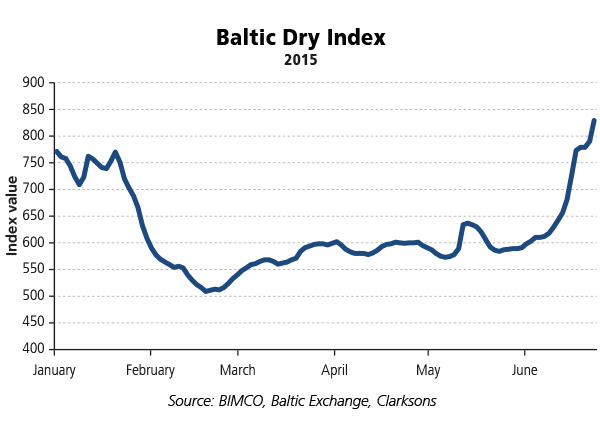 The BDI is lifted on the back of stronger Capesize earnings which has more than doubled during the month of June. Panamax earnings also improved significantly since late May. 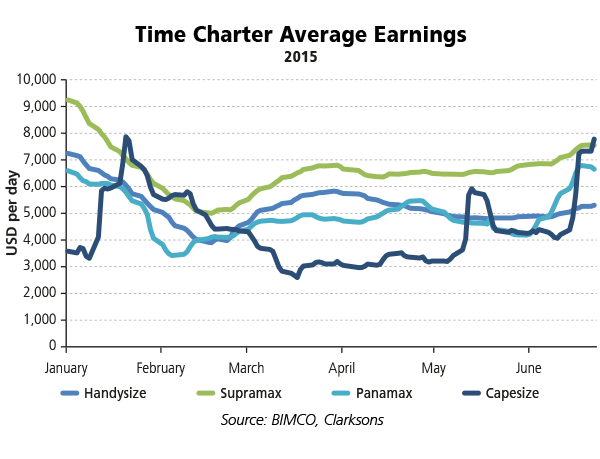 “As we have said before, BIMCO do expect rising volumes as the year progresses which should support the market if the supply side also contributes with limited fleet growth. In spite of the most recent development the market is still moving forward on fairly thin ice”, adds Peter Sand.