Dry bulk is under pressure on the commodity side and since the beginning of 2014 iron ore prices have slid. That development has made some of the mining companies alter their expansion plans of placing more iron ore on the market, when demand is obviously not as strong to uphold the former price level. From USD 140 per ton down to 42 in early April.

Since then spot Australian Iron Ore FOB prices (Source: Commodore Research) has improved. By end-May, Australian iron ore (63% iron content) was priced at just above USD 60 per ton. This is very positive as it proves demand is there despite steel production growth being negative in China (-1.7%) as well as rest of the world (-1.9%) during Q1. In 2014, Chinese steel demand contracted for the first time since 1995. As the Chinese economy is now changing, so is its steel demand. The knock-on effect for the dry bulk market will depend on the extent to which imported ore takes market share from domestically mined ore as well as absolute level of steel production. Current forecasts for global iron ore demand growth in 2015 is positive, at 3% (Source: SSY)

The other significant commodity, coal, is doing really bad in China while improving in India. Total Chinese coal imports for the first four months in 2015 came in at 68 million tons (Source: Chinese customs). Down by 38% - same period last year.  Both thermal and coking coal markets as well as lignite are suffering. The landed cost of coal into China at the end of May is not favouring imports despite very low freight rates. 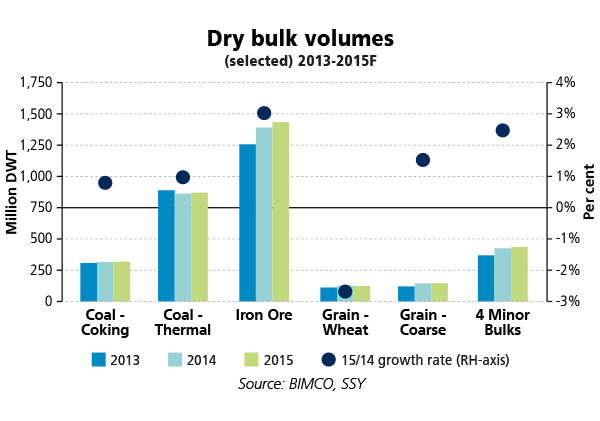 Supply:
Since the turn of the year, the dry bulk fleet as a whole has only grown by 0.5% and since early February, the fleet has not grown at all. This has happened as the demolished volumes have matched the number for newbuildings being delivered.

The Capesize fleet is actually smaller today than half a year ago (beginning of November). The development in Panamax and Handysize segment is flat, whereas the Handymax/Supramax segment has grown as we expected it to. In spite of 1 million DWT of Handymax capacity being demolished, 6 million has been delivered, equal to a growth in supply for that sub-segment of 2.9% for the year to date. 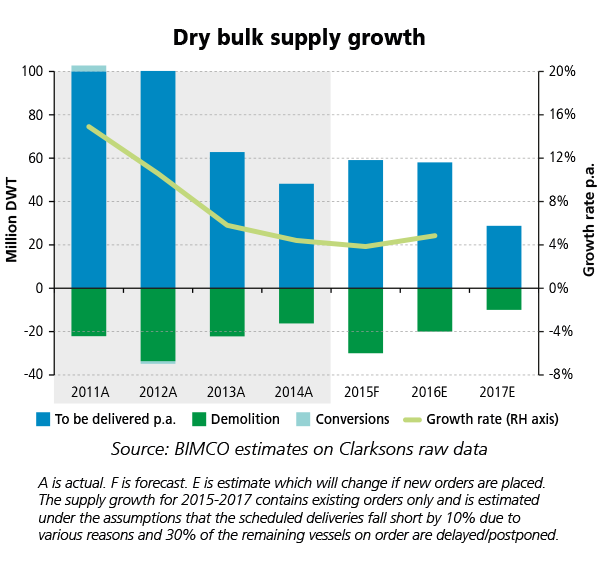 Another positive development is found on the contracting side. 35 new orders have been placed at global shipyards so far this year (1.8 mill. DWT). 7 Panamaxes, 12 Handymaxes, 16 Handysizes and no Capesizes have been added to the order book, which now stands at 1,750 ships with a combined capacity of 142 million DWT. This is to the shocking fact of 1,981 ships which were contracted during 2013-2014. 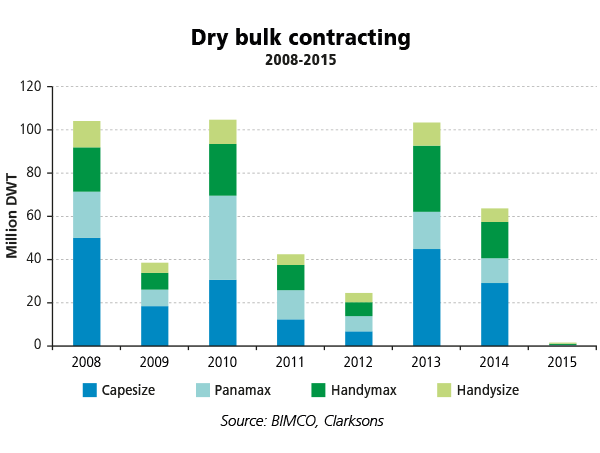 Outlook:
It is a small consolation that Indian coal imports may go up by 20 million tons, when Chinese imports drop by 30 million tons for the second year running.

Despite a very bad sentiment in the market, BIMCO expects volume to increase as we move into Q3. More Brazilian iron ore and grains (wheat and coarse) moving into the market as the soya season abates, should on an overall level, prohibit the market to go into reverse – if volumes contract.

The momentous imbalance between supply and demand continues to worsen in spite of a noteworthy 10-year low supply growth rate. 160 million DWT of new orders placed in 2013/14 can only do harm when demolition activity fails to slash any records by a never-seen-before margin. As the demand growth for dry bulk seaborne transportation seems to weaken too, potentially even on a permanent basis as China changes gear, the industry must adapt to become profitable again. Wait-and-see strategies may turn out to take too long.

If we are to believe that current utilisation levels are just around 70%, new orders should not just cool down for a while, they must be sensitively counterbalanced with demolition for a number of years, not just a few quarters.

For the coming months: June-August, BIMCO expects the market challenges to stick. The demand side is so weak right now, with China reducing coal import by 40% that it dwarfs most of the positive aspects of the market. On the upside we see owners limiting fleet growth by increasing demolition of obsolete tonnage. Whether this work on the supply side will prove to be effective enough to improve the fundamental balance only time will tell.

Contact online
BACK TO: Macro Economics: Shipping is faced with a positive, yet complex and changing macroeconomic landscape NEXT: Tanker Shipping: Still strong market with continued positive prospects especially for crude