Retail sales are a key driver of European container imports. In early 2020 and early 2021, retail sales volumes in the EU and the UK suffered setbacks due to COVID restrictions but recently, high inflation and historically low consumer confidence have been the main concerns. 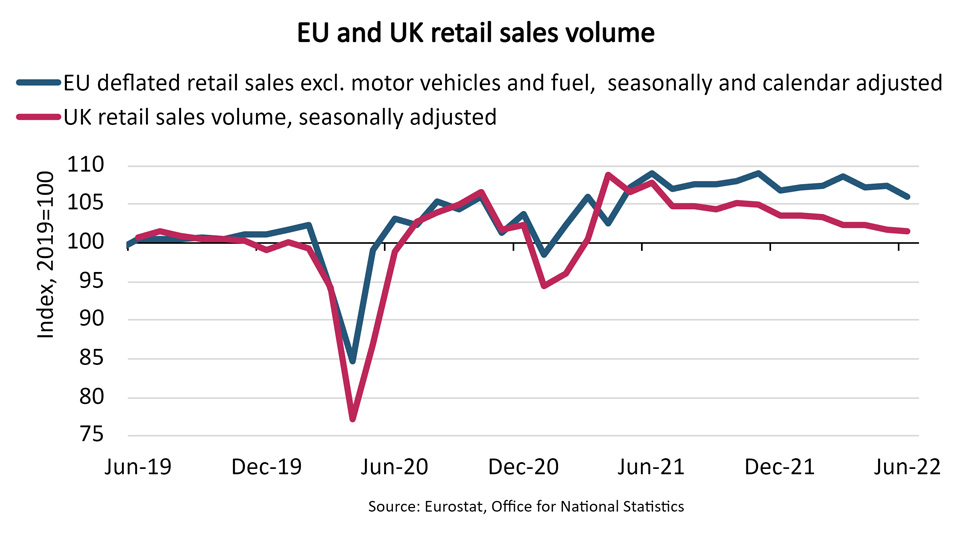 Retail sales volumes in Europe have not seen the same growth during COVID as in the US where the volumes in June 2022 remained 14.5% higher than the 2019 average. This has also reflected on container volumes, and according to Container Trades Statistics, global container exports to Europe in June 2022 were 5.2% lower than in June 2019, whereas to North America they were 18.8% higher.

Meanwhile, consumer confidence in the EU reached a new record low in July and in the UK, it remained at the record low level seen in June. Indicating contraction in the manufacturing sector, the July manufacturing PMI for the euro area also dipped below 50 for the first time since mid-2020. Lastly, it should be mentioned that goods inventories held by companies in the European Union grew at a record pace during Q4 2021 and Q1 2022.

All in all, indicators appear to point towards a further weakening of global container exports to Europe in the coming months. In the meantime, the key driver of freight and charter rates remains congestion, which is unlikely to change much even if exports to Europe fall even more.