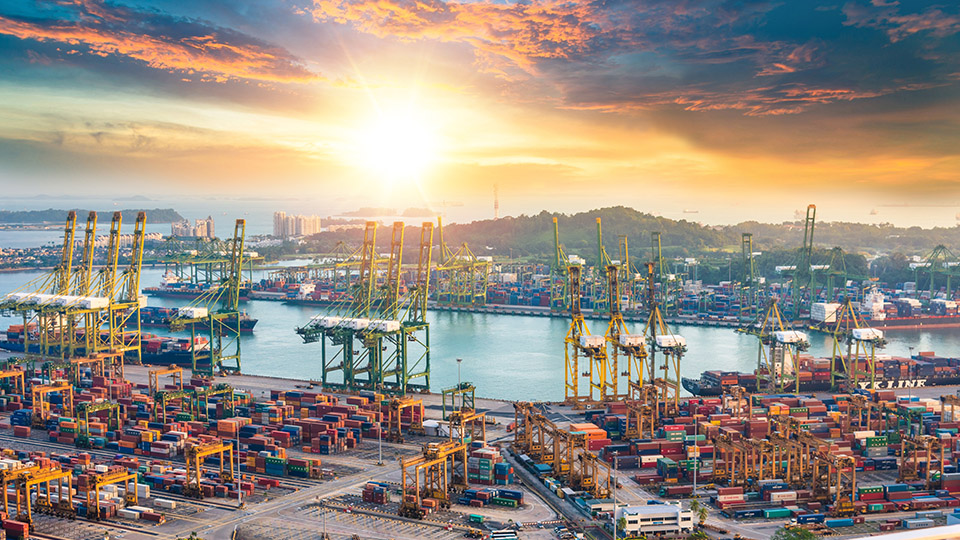 The container shipping market is currently making many headlines world-wide as freight rates and port congestion continue to reach new record highs. At the end of September, more than 50 container ships were waiting to berth outside the ports of Los Angeles and Long Beach alone and 90% of those arriving at a port had to wait at anchor before a berth became available. COVID-19 disruption at major Chinese and Vietnamese ports has also added to the long queues of ships, and certain ports are now being deliberately avoided by liners.

These scenarios testify to the fact that a digital transformation of the shipping industry is needed in order to raise the levels of transparency, reliability and efficiency. Some of the hurdles encountered, however, are the shipping industry being extremely fragmented in terms of data exchange, processes, technology and, to some extent, willingness to invest in digitalisation. These hurdles explain why shipping is lagging behind other industries when it comes to digitalisation.

The Just-In-Time Arrival concept (JIT) has been developed as a tool to enhance port efficiency and mitigate congestion problems. The aim of the concept is to reduce time at anchorage and thereby minimize congestion in the port area. If JIT is implemented successfully, it can not only reduce port congestion, but also result in reduced emissions while cutting costs. However, implementation has not happened yet.

Although the JIT concept is for all stakeholders, some segments (container and bulk) have been more open to the concept than others. Also, the ports and terminals have recognised the competitive advantage of JIT. To overcome obstacles and provide an effective implementation of JIT, clear and frequent exchange of information is needed between all actors in the ship-to-shore interface before, during and after operations. Actors include shipowners and operators, charterers, ship agents, authorities, port and terminal operators as well as many ship service providers, such as towage, pilotage and mooring. Harmonised communication between all actors is needed, as any gap in communication may lead to operational inefficiency or even incidents that jeopardise safety or protection of the environment.

The big issues so far have been about identifying which information to exchange between stakeholders as well as how to exchange the information. These questions are discussed frequently.

IMO adoption of the JIT concept

To facilitate and support a digital maritime transformation, BIMCO has continuously advocated for the establishment of a harmonised maritime data model to allow the easy transfer of electronic data between ship and shore. In 2020, based on a submission by BIMCO, the International Maritime Organization (IMO) adopted the JIT concept to its maritime data model (set out in the IMO Compendium).

The key word is “harmonisation”, which has nothing to do with the technology for data exchange but everything to do with semantics and speaking the same “language”. This is what makes harmonisation so vital in developing inter-operable technical standards. Technology represents the mechanism by which the standards are implemented. As new technologies emerge, and new ways of exchanging data evolve, new standards will be needed. However, harmonisation is needed for a clear data model structure and clear procedures for maintaining it. This is vital for inter-operability between different domains and between different technologies and therefore has the attention and focus of the IMO Compendium, the IMO Reference Data Model and the corresponding IMO data set.

Currently, the IMO reference data model consists of around 350 data elements. An additional 150 elements are pending finalisation of data modelling. Furthermore, 200 new data elements are up for discussion later in 2021. It is estimated that the total number of relevant data elements needed is around 1000-1100, which will cover approximately 95% of the general data exchange between ship and shore.

The aim of the IMO Compendium is to pave the way for the smart and easy exchange of electronic data by establishing “one” language. This bottom-up approach establishes the base layer for communication (the language) for the exchange of data, which together with the individual national software solutions (APIs) are all aiming for the same goal of digitalising the maritime industry.
For shipping to benefit from machine-to-machine interaction and global inter-operability, it is paramount that all systems and platforms make use of the same data element ID.

In June 2021, the IMO Facilitation Committee concluded its 45th session by agreeing on a new tool for measuring the domestic implementation of the Convention on Facilitation of International Maritime Traffic (FAL). BIMCO strongly supports this initiative.

Even though the IMO made it mandatory for all its member countries to exchange key data electronically (under the FAL convention) already in 2019, a recent survey by the International Association of Ports and Harbours (IAPH) has revealed that only 30% of the responding ports comply with that mandatory IMO requirement. Interestingly, the ports indicated that the main barriers were not technology, but the legal framework in their countries or regions, human capital limitations, and persuading the multiple private-public stakeholders to collaborate.

This illustrates that local and regional solutions will not work, and that the industry needs an international and harmonised solution for digital exchanges with ports, terminals and authorities.

It is commonly acknowledged that improving the quality and availability of many different real-time operational data is critical to facilitating the arrival, stay and departure of ships, people, and cargo. Hence, harmonisation of existing industry standards is a requirement to improving the digital data exchanges.

Behind but well under way

The implementation of the JIT concept is still in its early days but there is massive interest in the concept across the maritime industry.
BIMCO has recently developed a special JIT Arrival Clause to overcome the primary obstacle to JIT arrivals; the obligation on shipowners to proceed with due or utmost despatch and without deviation. This is a critical aspect of making JIT arrivals work. Removing this obstacle will allow ships to optimise their speed and thereby arrive at a port at an optimal time to avoid delays without breaching their usual voyage charter obligations.

The JIT data model (JIT port call data definitions) is already in place to support the interface standards and enable automated data exchange between carriers, ports and terminals.
What is currently missing is wider implementation and adoption by various stakeholders in order to make it inter-operable. Software providers will have to adapt their systems to the harmonised data structure and ship systems will need to be implemented. Additionally, authorities, ports and terminal operators must establish information-sharing communities empowered by data-sharing platforms (data pipelines) to make transparency among the involved actors possible.

Although the shipping industry is still behind many other industries when it comes to fundamental digitalisation, we are however well under way.